First Flight. Done. One down and two more to go.

The woman behind me was eating an onion sandwich that was filling the entire cabin with the strong odor of, well… onions. As passengers continued to board, one of them walked past my aisle and said loudly “do I smell a hippy?”. The woman behind me, I’ve come to conclude, was trying to out me before we even left the ground. It worked. 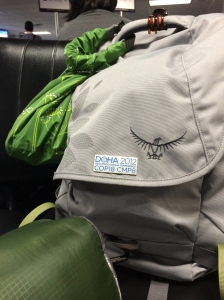 I guess my gear outs me, too.

Three and a half hours, 2 homemade habanero jack quesadillas, and a 50 page Climate Action Network (CAN) summary about the work to be done at COP this year later, I find myself sitting at my next gate in the D.C. airport. Everywhere around me are people speaking French, German, Dutch, and what might even be Polish. Thus starts the international leg of my journey and being the youngest person by far at my gate I and reminded that I’m pretty lucky to be going to COP (and also how many challenges and privileges being a “youth” in a primarily “adult” space presents).

As I was reading the CAN report, aptly titled “Warsaw: On the Road to Paris” I was struck with how many abbreviations and moving pieces within the UNFCCC that I still don’t know about. What I can say with confidence is that there are so many amazing ideas and projects that if implemented could really do some amazing things! On the other hand. Reading more about how the U.S. really does nothing but stall progress and not follow up with their promises makes me ashamed and frustrated. This is the year to get our negotiators to finally hear us. There is no reason that we should not be able to come to a binding treaty by 2015!

CAN sums it up nicely: “The scope, structure and design of the 2015 agreement should be consistent with a 1.5oC global carbon budget with high likelihood of success, including targets and actions within an equitable framework that provides the financial, technology and capacity building support to countries with low capacity. It should be serious about ensuring sufficient support for dealing with the unavoidable impacts of climate change. It should be built on, developing and improving the rules already agreed under the Kyoto Protocol and the Convention including transparency through common and accurate accounting and effective compliance processes, respecting the principles of equity. The form of the 2015 agreement should be a fair, ambitious and legally binding protocol… There won’t be an ambitious 2015 deal without equity and there won’t be equity without an ambitious 2015 deal.”

Off to Brussels and onwards to Warsaw!